I noticed that I haven’t posted in a while so I figured that I should find some old photos to share. This “Weekly Photos” series will be a selection of past photos that I haven’t published and will not be as detailed as the other photography posts. I will, however, try to have a common theme between each of the images that I have selected for the week.

The theme for this week is “Light”.

In the following images, I have chosen to focus on the beauty of light and how it interacts with the environments around me.

While I try to incorporate some kind of “story” in my images, sometimes it is nice to photograph something that is simple and visually-pleasing.

The sun is the primary source of light that is found in many of the photos in this selection. When used as the main source of light for backlighting, the sun casts a warm outline on subjects.

As the sun slowly rises above or descends below the horizon during the sunrises and sunsets respectively, the indirect angle of the light can produce beautiful effects when combined with clouds and the sky itself.

The remaining image of the fireworks captures the trails of light that are painted on the nightly canvas as the fireworks explode in a harmonious fashion. The landscape in the background was illuminated by the continuous stream of fireworks above.

I hope you enjoy this week’s selection of photos.

This post is a continuation of the series of photos from my trip to Manchester [Part 1 and Part 2].

Instead of photographs of people as in the previous two posts, this post focuses on the patterns and shapes that I noticed through my brief exploration of the streets of Manchester. In addition to the change of subject matter, these photos have all been taken in colour using the Kodak motion picture film stock Vision 3.

Sometimes, beautiful scenes are rewarded to photographers who travel off the beaten path. For this photo, I wandered away from the downtown area of Manchester and was immediately drawn to an alleyway with aesthetically-pleasing designs painted on the walls. On a closer inspection, I realised that I would be able to draw out more from the scene than I initially anticipated (pun intended).

In this image, I focused on two patterns: the patterns of lines underneath the window sills, and the pattern of posters covering the window panes. I was able to frame each set of patterns using the rule of odds (in this case it is the rule of threes). There are three sets of patterns along the main horizontal that are equally-spaced apart.

I have a form of synesthesia where certain numbers are associated with colours. Hearing or reading about the number will result in imagining the colour and vice versa. Sometimes, I have also caught myself thinking, “that is a very [number]-coloured object” or “the number is [sequence of colours]”. For me, the number three is associated with orange so seeing the three orange lines made the lines even more orange (if that makes any sense).

For the photo, I used the piping alongside the walls to separate the scene into three approximately equal frames. Within each frame, there is a poster of a headshot of a futuristic-looking individual for the bar Twenty Twenty Two. Underneath each group of posters, there is a set of cyan, orange, and purple lines. I decided to take the photo at an angle to the alleyway to avoid too much repetition between the frames and also to avoid imprinting my own shadow on the wall.

The next photo was taken of a building near the town hall area in Manchester. I noticed that the outside of the windows were decorated with floral patterns alongside the south side of the building.

There doesn’t appear to be an overall pattern in the placement of the designs other than adjacent windows having different floral designs. Again, the number three appears as there are three unique floral designs.

I used a Dutch angle to photograph the building to avoid shooting the scene with a portrait orientation. Personally, I tend to avoid photographing architectural structures with a level horizon as I feel that it results in a boring image. The trees at the base of the building and the adjacent building help to offset the off-balance feeling from the Dutch angle. The use of the Dutch angle also helps to draw attention to the third column of floral designs as they are placed on the diagonal line within the frame.

Interesting scenes can be found anywhere. It is up to the photographer to make the most of his or her surroundings and create interesting photos. In addition to being observant, it is also important to be able to predict the movement of the objects that make up the scene.

In the case of this image, I used the tram and the overhead electrical lines as well as the cross in the background. I had pre-focused the lens and used a fast shutter speed and narrower aperture. I had intended to capture the tram’s pantograph as the tram travelled past me, but the resulting image exceeded my original expectations with the use of lines.

The next image was taken of part of an art installation called The Manchester Lamps which was made by the art and design studio Acrylicize. There were five different lamps, each representing a different aspect of Manchester’s history [1].

This photo was taken underneath a single lamp. I chose to capture only a small aspect of the lampshade rather than the entire lamp as I was attracted to the patterns and shapes rather than the lamp itself. The lampshade combines softer rounded lines and circles with harsher edges and triangular shapes.

In this photo, I used the rule of odds to compose the three tower cranes against the clear sky. The positioning of the cranes is almost perfect as they all lie on the diagonal of the frame and are equally-spaced apart.

This picture was taken in the Cathedral Gardens near the National Football Museum. I was taking a short break from walking around the city and positioned myself to shoot the wooden bars from the bench I was sitting on.

The photo is a bit different from the rest of the images in the set as it is the only one with people in the frame. However, I believe that the inclusion of the people helps to strengthen the image and also contributes to the patterns that were captured.

I waited until the woman on the left walked past the shortest pole from the left side. The curvature of the four poles draw interest to lead towards the woman and it feels that she is a part of the art installation itself. In the same vein, the four windows feel as if they are pointing down to the man sitting on the concrete slab. While the pattern for the woman was intentional, I only noticed the pattern in the windows after I had developed and scanned the film.

The images in the post are a bit different from the normal subject matter that I am interested in. However, it is fun to photograph different things once in a while. I hope you enjoyed reading about the images as much as I had taking them. I believe that I have enough images in colour to do a continuation of the Manchester series (this time with street photography).

The images have been shot on a Canon EOS Elan 7e (EOS 30) film camera using a Canon EF 50mm f/1.8 STM II lens. The film stock used was 35mm Kodak Vision 3 250D (5207/7207) shot at 250 ISO. The majority of the photos have been taken using shutter priority with an adjustment for the exposure compensation depending on the scene. 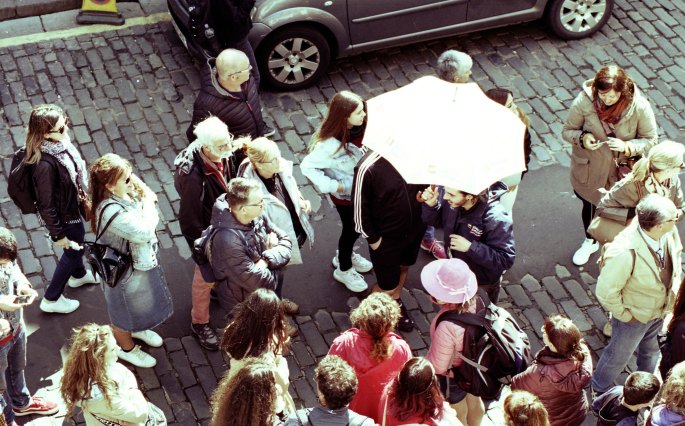 I had heard about the bleach bypass process before and was interested in trying it for myself with street photography. The result was high contrast and colour shifts, perfect for the unpredictability of the street.

Under standard C-41 (Colour negative) development, the film undergoes a C-41 developer step, a bleach and fixer step (or sometimes in a single step with a Bleach Fix (BLIX) mix), and finally a stabilisation step.

However, the bleach bypass process bypasses the bleach step and proceeds straight to the fixing step. By skipping the bleach step, the negative retains the metallic silver particles and the result is brighter highlights and mid tones while the shadows remain relatively unchanged.

Seeing that the day was going to be sunny, I had set out to photograph scenes which had medium to high contrast to test out the effects of the bleach bypass process.

Unedited [left] and edited [right] versions of Man with an Umbrella

In this first set of images, I was drawn to a man who was holding up a yellow umbrella in the broad daylight. I realised that this scene would be perfect to showcase the effects of the bleach bypass on the highlights in the umbrella.

In the unedited version, the entire scene appears to be overexposed due to the silver content in both the highlights and mid tones, with the greatest overexposure occurring in the highlights. There is also a slight colour shift which may arise from the silver content or it might be related to the fixing step (as the Ilford Rapid Fixer has a lower pH value than the bleach fix in the Tetenal kit).

In the edited image, I was able to correct for the overexposure in the mid tones by reducing the brightness and applying a slight colour correction. However, I was not able to recover any details in the highlights as they were complete blown out.

Unedited image to showcase differences in highlights and shadows

In this unedited image, there is a high amount of contrast between the highlights and shadows even before touching the contrast sliders. The shadow areas contain less silver and should appear similar to the shadow areas of an image obtained with the bleach step preserved. The highlights and mid tones in the negative space are used to place greater emphasis on the darker subjects of the amp and instrument case.

With these results in mind, I would need to shoot the film with an underexposure of at least 1 or 2 stops if I wanted to avoid completely blowing out my highlights. However, the blown out highlights might be desirable in scenes where I am able to single out the subject like in the photo of the man with the umbrella.

The majority of the photographs I had taken were in sunny areas where there were harsh shadows and bright highlights. It may be of interest to try the bleach bypass process with scenes where there is a lower amount of light or contrast.

Overall, I enjoyed the results and will continue to use the bleach bypass process in the future.